I cannot give an adequate excuse as to why I hadn’t hauled myself out for a ‘proper’ walk this holiday. Not back to work until Thursday, my institution closes down until new year, making me very lucky. Yesterday we got ourselves out and went over into Yorkshire, near Haworth, taking in the moorlands.Winter doesn’t tend really to kick in here until January, but still. A cool breeze and the exposed black of the tree branches added a note of chill bleakness, yet it’s been so oddly warm, hardly a frost so far this season.

At least some exercise gave me another excuse to collapse in front of the fire and catch up on some more of my Christmas book haul. I feel like the last person in the world to read Margaret Atwood’s The Testaments (having first read The Handmaid’s Tale back in my teens!); finally reading Anne Patchett’s The Dutch House; finally also got hold of a copy of Noel Stratfeild’s autobiographical A Vicarage Family, plus several non-fiction books this year. I am normally a far bigger fiction reader, but gave a couple of new things a try.

There’s How Bad Are Bananas?: the carbon footprint of everything  by Mike Berners-Lee, one to dip into, slightly horrified, as it warns of the environmental impact of daily purchases and actions. This includes, my son pointed out, having children (a lifetime impact per child 373 tonnes of CO2, in case you’re interested – which can be reduced to 100 tonnes, but can also rise to a lifetime footprint of 2,000 tonnes for the profligate). I also got Sapiens: a Brief History of Humankind by Yuval Noah Harari. I have been looking for some time for a book that documents early humankind, though whilst this begins around 70,000 years ago, it follows the timeline into the present and on into the future. I didn’t consciously put this on my list to explore the stark warning to the human race about the type of future it faces but am expecting the omens to be clear. I have read up to the dominance of Homo sapiens so far, and it’s engrossing. 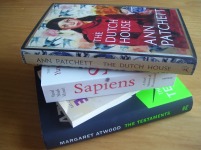 As author Neil Gaiman pointed out, “Books make great gifts because they have whole worlds inside of them,” adding, “And it’s much cheaper to buy somebody a book than it is to buy them the whole world!” How true.

In a couple of days, the alarm will go off at half-past five and I’ll be back out into the real world. In the meantime, I’ll spend some more time here, and have the world come to me for a while.

Did you receive a favourite book, or other favourite gift, this year?

This site uses Akismet to reduce spam. Learn how your comment data is processed.